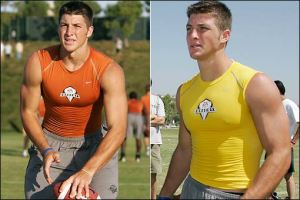 As I said to Mr. Perfect just the other day, if Mr. Perfect and I don’t work out, my best bet is Tim Tebow. No, I don’t know Tim Tebow personally (I am not even sure I am spelling his name right); I’ve never been to a Gator game. But what I can say definitively is the guy has the qualities I’m looking for: he’s a Christian male saving himself for marriage, he’s passionate about something, he values education, he’s tall, he’s built, he wears Bible verses on his face during games for inspiration, he gives credit to God…dude is perfect. 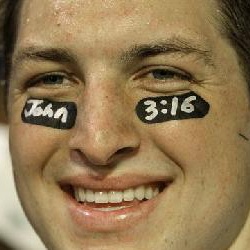 But my fixation on Tebow as a potential Mr. True Love is also a subconscious nod to the fact that there aren’t a lot of realistic choices out there for a girl like me. Sure, there are men out there who say they want a woman like me who is a good Christian woman who can cook and clean, is good with children, has her own apartment, car and job, has a degree, is intelligent, well read, loyal to a fault, warm, giving, and willing to meet a brother where he is, but it’s all just that–lip service. They don’t want to wait until marriage for sex (no matter if they are Christian or not…people get real liberal around that sex thing); all those personality traits and the good cooking is cool, but I’m not slap yo’ mama fine, so that’s for the birds. In all honesty, should Mr. Perfect and I part ways, I will probably be by myself for a very long time, and when I do meet men, they will wonder what the hell is wrong with me that I haven’t had sex yet, or think if I’m that great then I must be psycho or my lady parts must smell or be otherwise undesirable to account for my singlehood. I’ll end up tarrying for a husband well into my thirties.

I give up on trying to understand what men want in relationship to what women (or rather, I) need. Men always insist that they are simple creatures, but indeed, they are not. They like to believe that all women’s problems stem from daddy issues and whatnot, but some just come from men not knowing what they want or trying to anticipate what a woman is going to feel/do from the reactions of another woman. We are not one size fits all.

Take a familiar discussion Mr. Perfect and I have. For whatever reason, which seems to me to come from talking to other women he knows, he thinks I have this continuing problem with not seeing him much during the week.
When I wasn’t working and had nothing to do, this did irk me a bit. But now that I’m working, it hasn’t been an issue for me in a year. He has recently found things to do during the week–Monday Night Football, a meetup group, the gym, happy hour with coworkers–and I say more power to you. I don’t usually call or message him because he might be out doing something and not want to be bothered (or not have his phone’s volume/vibrate on). If he wants to talk to me, he calls. If not, I write in my blogs, watch TV, watch movies, dance around my living room to my iPod, cook meals, read Harlequins, read the Darwin Awards, clean, or sleep. Occasionally, I talk to friends, my mom, or Pink Susie or search for random things online. I don’t sit around with the sad face looking at my phone that’s not ringing. But I have given up on trying to convince him that it only irritates me that he thinks it irritates me. This non-issue seemed to resurface when some female co-workers of his made some comments about wanting to see their men more durning the week. For whatever reason–maybe he feels guilty for this assumed grievance I have; I don’t know–he feels compelled to keep explaining why I don’t see him during the week.

To be honest, there are things that actually do irk me, irk me a lot more than not sitting in his apartment watching him watch TV every weekday, but they don’t irk me enough to where they are an issue I just have to have addressed right now, nor are they deal breaker issues. It could be said that I have developed a high tolerance for annoyances, pain, frustrations, and being let down by others through my oftentimes disappointing experiences with people in familial, friendship, and romantic relationships. I am not a complainer or a knit-picker that way. My aunt constantly ridicules me for my weight; my dad is by turns interested in my life and grateful to have me as a daughter, then calling me inconsiderate, selfish, rude and all manner of unpleasantness; my younger cousins made fun of my clothes and my hair for years; I’ve had to fight for every opportunity that gave me an advantage in school/life, otherwise I was looked over for no apparent reason, other than I didn’t stand up for myself; I don’t ask people for anything because in my experience they let you down–they say they’re coming and they don’t show, they say they will get you something and they never do–and I know that at the end of the day, I can probably get it myself without all the uncertainty. In turn, I don’t need a lot of praise–in fact, it makes me uncomfortable for people to give me compliments or praise. Because I don’t need it or expect it, maybe I don’t give it as much as I should, either. Maybe people think I am ungrateful, or mean, or feel entitled because I don’t always verbalize my praises of them to their face. I just can’t stand to be made much of, especially in the patronizing way some people have of over praising you, as if you wouldn’t do anything without the proper thanks you felt you were due.

I remember a couple of years ago when the thing to be was “wifey material.” On every female’s facebook page, her middle name was “wifey material” or she was in a million groups proclaiming herself to be wifey material. Me, I have never thought of myself that way. I am not gorgeous, which seems to be all they meant. I am also not used to letting anyone else lead, as far as my personal life is concerned. I have to be up front and know where we are going, even if I don’t have a say in charting the course; I can’t sit in the back and enjoy the ride. I have a hard time telling people when they’ve hurt my feelings or offended me. I avoid direct confrontations for as long as possible. I’m used to looking out for me and expecting you not to. So no, I have never considered myself to be wifey material. But (wo)man was not meant to be alone. But it’s still a lot to adjust to. Yes, even two years in. I’ve been this way for twenty-four years, shaped to be so by twenty-four years of experience; in relation, two years is not a whole lot of time, and I think I have grown a lot. Maybe I’m still not wifey material, but I’d like to think I’m a better human being, after a fashion.

Happy belated two year anniversary, Mr. Perfect. At least, I hope it’s been. It has been for me, for the most part, despite all of life’s little upsets. If not, I guess there’s always Tim.