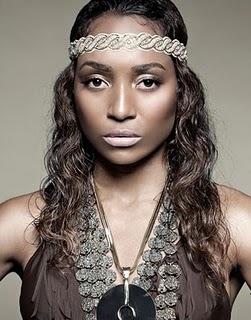 When I first saw the promo for “What Chilli Wants”, I laughed out loud, a real laugh, head thrown back and mouth wide open. Not because it was really that funny but because this is something I talk about with women a lot. There is a difference between having standards and values/beliefs you expect somene to share and expecting perfection. When you choose a mate you are shopping,. sure; but you are not at Burger King or getting something custom made. You aren’t ordering from an ala carte menu. It’s not going to be exactly what you want exactly how you want it wrapped in the exact wrapper you wanted. It’s a person, not a vehicle; if he’s perfect but you wanted him in Puerto-Rican, Chines & Black mix, you are probably going to have to settle for him being Black with a suspicion of Indian in his family.

What Chilli and most of us don’t seem to realise is that settling and compromising your ideals are not the same thing. There’s a book out called Marry Him: The Case for Settling for Mr. Good Enough. I haven’t read it, but I intend to. It has some interesting commentary on lists and settling, at least in the excerpt I read. Here are a few:

Maybe the man I was looking for on paper simply didn’t exist. And maybe, as my friend suggested, some of these qualities weren’t that important when it came to a happy marriage anyway.

Yikes. What if she was right? Had I overlooked men who might have turned out to be great husbands because I was drawn to an instant spark and a checklist instead of a solid life partner?

Meanwhile, my unconscious husband-shopping list grew even longer. Like a lot of women, the older I got, the more things I wanted in a guy, because while life experience taught me what I didn’t want in a relationship, it also gave me a better sense of what I did want.

You can Read more of the book excerpt on the link.

There are so many things wrong with Chilli and her list I wouldn’t know where to begin myself. She lists things that are preferences, that don’t matter, that you don’t need to be happy. But so do I. The difference is she doesn’t seem to know this, after all this time! She should know that just because a man has big “peeps,” it doesn’t automatically correlate to great sex; she should know that tall chocolate men with big peeps, who don’t smoke, drink, eat pork, love the Lord, and etc. ad nauseum are married, gay, or not looking for an aging woman of any color, no matter how great she looks!

I heard an interesting theory on the radio, which is really why I bothered to write this at all, with the influx of blogs about it (Haven’t read any of them because I wanted to put my own sources for discussion out there). The host, who calls himself the woman whisperer, postulated that maybe the reason this woman clings so desperately to her list and is so inflexible about what she wants isn’t because she needs all of that, but because she knows that she’ll never find it; she’s protecting her heart because she doesn’t want to get hurt. If she doesn’t find this perfect guy, she doesn’t have to open herself up to a man and risk being hurt again.

The desperation of Chilli is obvious. I don’t doubt her sincerity. She seems to want to be loved and get married, but I think that she throws perfectly good men away. I don’t know anything about Floyd Mayweather, but she looked happy with him, even though she won’t give him a chance because he doesn’t meet all of the requirements on her list.

I can’t deny I’m interested to see how many other perfectly good men she throws by the wayside before she realises she needs to change her mind to get her man.

Lori Gottlieb’s book began with an article of the same name, that can be found here. She talks in the article about settling, compromising, standards, and her changing view of what a marriage should be as a single woman in her forties.  A few lines that stand out to me are these:

It sounds obvious now, but I didn’t fully appreciate back then that what makes for a good marriage isn’t necessarily what makes for a good romantic relationship. Once you’re married, it’s not about whom you want to go on vacation with; it’s about whom you want to run a household with. Marriage isn’t a passion-fest; it’s more like a partnership formed to run a very small, mundane, and often boring nonprofit business. And I mean this in a good way.

“I just want someone who’s willing to be in the trenches with me,” my single friend Jennifer told me, “and I never thought of marriage that way before.”

They believe that part of the problem is that we grew up idealizing marriage—and that if we’d had a more realistic understanding of its cold, hard benefits, we might have done things differently.

Those of us who choose not to settle in hopes of finding a soul mate later are almost like teenagers who believe they’re invulnerable to dying in a drunk-driving accident. We lose sight of our mortality. We forget that we, too, will age and become less alluring. And even if some men do find us engaging, and they’re ready to have a family, they’ll likely decide to marry someone younger with whom they can have their own biological children. Which is all the more reason to settle before settling is no longer an option.

Settling is mostly a women’s game. Men settle far less often and, when they do, they don’t seem the least bit bothered by the fact that they’re settling.

“Women are the least romantic,” Gabe said. “They think, ‘I can do that.’ For a lot of women, it becomes less about love and more about what they can live with.”

Not long ago, Gabe, who is 43, dated a woman he liked very much one-on-one, but he broke up with her because “she couldn’t be haimish”—comfortable—with his friends in a group setting. He has no regrets. A female friend who broke up with a guy because he “didn’t like to read” and who is now, too, a single mom (with, ironically, no time to read herself) similarly felt no regrets—at first. At the time, she couldn’t imagine settling, but here’s the Catch-22: “If I’d settled at 39,” she said, “I always would have had the fantasy that something better exists out there. Now I know better. Either way, I was screwed.”

The paradox, of course, is that the more it behooves a woman to settle, the less willing she is to settle; a woman in her mid- to late 30s is more discriminating than one in her 20s.

So what do you think about settling? Did you settle? Would you settle? What are your dealbreakers, and are they really  dealbreakers? Are you too picky? How important is passion and finding your soulmate to the success of a marriage in your opinion? Feel free to comment on the quotes, or whatever else you think is comment-worthy.

Almost forgot my favorite quote from Missy Elliott in the previews: “Jesus is taken; Barack Obama is taken”…LOL…in other words, it’s time to get real!”

2 thoughts on “What Chilli Wants: Lists that Limit You”