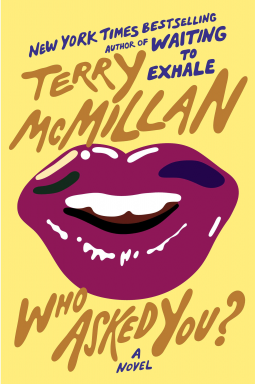 In the interest of full disclosure, I have a long and varied history with Terry McMillan books. I have read some of her books for pleasure and some for college classes. I read Waiting to Exhale when I was a little too young on a six hour round trip with my aunt and uncle. I read Mama and Disappearing Acts for two different college classes. This being said, Ms. McMillan isn’t in my pantheon of writers whose books automatically go on my to be read list whenever they have a new book out. As much as I like her writing style, I take her books on a case by case basis. Consequently, when I saw Ms. McMillan had a new book set to be released this September, I read the description thoroughly before requesting it.

I read a tweet from Joyce Carol Oates that says that a review should only be what you liked about a book and/or who would be interested in such a story. In other words, it should never be critical. I disagree. I believe in sharing what I liked and didn’t like so that other people with similar likes and dislikes will be better informed when making their decision to read or not read. Some of the things I say I dislike may not bother you at all or may be something you are looking for in a book. I think that if a book provokes a deep level of feeling in you, whether good or bad, it is living up to its job as a view challenger and conversation starter. With that being said…

Terry McMillan’s Who Asked You? is set in a diverse neighborhood in Los Angeles. It revolves around the lives of Betty Jean Butler and her family. Betty Jean is dealing with things that are sadly prevalent problems for women her age: her husband’s Lee David’s Alzheimer’s; raising her two grandsons, Ricky and Luther, as her daughter Trinetta attempts to “get herself together”; two nosy sisters, Arlene and Venetia, with their own set of problems as well as judgments; a son, Dexter, who is in and out of prison; another son, Quentin, with a successful chiropractic practice and a losing record with relationships, and; her neighbor, Tammy, who supports Betty Jean even as her own life is being turned upside down by her family. The book spans many years and chronicles many changes in the relationships of the characters. Some of the developments are easy to see coming, while others, though fair, seem to come out of nowhere on first read. Ms. McMillan follows her characters through several life changing events and documents their journeys with spirit.

There were many things that worked well in this book. The first thing that stuck out to me was how McMillan used first person narration from several different points of view to tell the story. Although I was skeptical at first, I think that this gives the story an added depth that would have been missing from a traditional first person narration or an omniscient narrator. The multiple viewpoints of the story give each character the opportunity to show the reader how things look from their perspective, the motivations behind the things they do, and gives each person more depth than they would receive in a single narrative perspective. It also works well with demonstrating how interwoven the lives of those within a family unit are, whether they like it or not. Someone always has an opinion or something to say, even when you don’t ask for it. I think Ms. McMillan did an excellent job of making each character’s voice unique. With so many different people having the opportunity to speak, it shows an amazing level of talent and attention to detail to keep them all individualized so well.

I liked the way Ms. McMillan develops the plot in a story that could have been overrun by its narration. While this is a character study on a microcosm of society, it also has a plot that moves. While many of the plot points may seem inevitable, it only aids in helping the author fade into the background; it’s as if the reader is watching real life events unfold instead of watching an author throw a plot twist at a character and see how they react to it. By using their narration and the narration of others to develop each character, Ms. McMillan saves the reader from sitting through pages of character development and background information. I, for one, appreciated this approach.

I have to admit that I could have done without some of the characters’ narrations, but I understand why they were there. I also didn’t agree with some of the viewpoints that seemed to be pushing a social agenda, but I can respect that a book should make you think about your belief system and what you support socially and politically. While I feel as if the election of President Obama is one of those historical events that demands mentioning in every story set in the relevant time period (like the Kennedy Assassination or the Challenger tragedy), I didn’t see how some of her discussion of it made sense for the specific character speaking. In fact, some of the changes to the character’s viewpoints towards the end of the book seemed a little sharp and quick for me. I would have liked more about the intervening years between the different segments.

The Short Version: I really enjoyed the book. The book had interesting characters with unique voices that represented a good percentage of the community. Ms. McMillan’s choice of multiple first person narrations allowed the book to show both each character’s individual perspective and the interconnectedness of everyone as a family and community. I could have done without being in some of the character’s heads, but I understand the necessity of presenting their point of view. While some of the viewpoints seemed to have pointed political and social agendas, the viewpoints didn’t compromise the integrity of the portrayal of the characters, so I can live with it. If you are a Terry McMillan fan, you will love this book, and it’s worth a read if you are interesting in African American fiction that is not Urban literature. It is also a good study of the changing attitudes and make up of our communities. I would recommend this book to anyone wanting to see a more personal rendering of many of today’s issues, from dealing with a spouse’s illness to raising your grandchildren, to boomerang children, and having to work past your retirement date.

Who Asked You: *** & 3/4 out of **** for narration, characterization, plot progression, depictions of community life and struggles, and high quality writing.