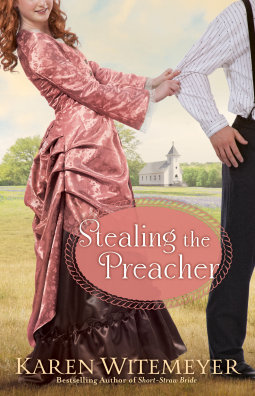 I don’t usually read historical fiction, not even historical romances. When I think of historical romances, I think of Victorian era women in a thousand yards of drapery and feathered hats fainting while scallywags in top hats attempt to ravish them. That just isn’t my thing. But there was just something about the premise of Stealing the Preacher that made me want to take a chance on it. I’m glad I did.

For his daughter’s birthday, former outlaw Silas Robbins kidnaps aspiring minister Crockett Archer off a train. Even though Silas doesn’t know what his daughter could possibly want with a preacher, he is determined to get one for her. Crockett was on his way to Brenham seeking to be appointed minister of the local church by the elders. He tries to run away from his captors and get word to the leadership in Brenham that he has been delayed. Upon meeting Silas’ daughter, Joanna, Crockett learns that Joanna wants a preacher to help her save her father’s soul and resurrect the area’s church. He admires her dedication to her father and her faith, and uses his delay to preach a sermon for her birthday. He promises that he will help her find a preacher for the church, perhaps the gentleman he is competing against for the position of Minister at the Brenham church. While considering all that has happened, Crockett begins to think maybe he is the preacher that God is sending to resurrect Jo’s church. There’s certainly something about this woman that pulls at him. What does God have in store for him?

Using my romance novel review rubric, this is how Stealing the Preacher fared:

Overall, I am in love with this story. I loved the characters and the way that Ms. Witemeyer weaves God throughout this work in a way that feels authentic. God was another character in this story; His will was sought and accomplished even by characters who didn’t know carrying out his plan. I love that Ms. Witemeyer didn’t bog me down in petticoats and parlors, but let her characterization and plot take me on a ride. I think this is the best romance I’ve read in a long time, Christian or otherwise.

I highly recommend you pick up this book.

Stealing the Preacher: ****/**** for characterization, plot, good employment of faith and God in the work, a dramatic climax, and nary a petticoat or a parlor.

*I was given a free kindle version of this book to review. No compensation was provided for this review.