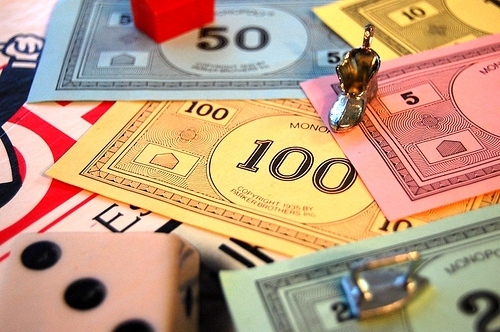 Mr. Perfect and I were strolling through the park yesterday and I decided to ask him about money, because I was curious and had nothing else to keep my mind off the hot sun on my back. I’d asked him before but didn’t really get an answer (we got off on some tangent or other and never got back on it).

The specific money matters we were talking about were paying bills as a married couple and how he wanted to handle his bills with his wife. What I got out of his answer was that he would split mortgage/rent 50/50 and maybe each person would pay certain bills. He also said something about taking into consideration how much money the other person makes in comparison to him and etc.

I’ve thought about the money thing often enough. It would be a very big aspect of life. I mean, bills have to be paid. I prefer to pay bills on time in full. Some months are harder than others to stick to that, but that’s how I like it. I have no problem pulling my weight or paying my fair share; wouldn’t want anyone to think I’m asking because I plan on keeping my money in my pocket. Still I like punctuality and practicality above all else when it comes to my money.

Me? I have no problem splitting it all 50/50, no consideration of my income necessary. I’d have less money left than him (considerably, at this point, lol) but that wouldn’t bother me and eventually that will change. I would prefer a household account and individual bank accounts for our personal money. I just think it’s easier for our half of the bill money to go into one account and for checks to be written or bills paid online from one account, most effectively by one person, but with the ability to be handled by either and with both having access to the bills/amounts and the bank statement.

Money is one of those issues that, if people are mismatched, kills marriages. As long as we were dating or whatever and my money was mine to spend how I wanted, things were great, but now here you are all in my financial kool-aid. I’m a saver, you’re a spender. I pay my bills on time, you pay yours whenever you feel like it. Your credit is fantastic and mine is ridiculously battered and bruised. Whether it’s a lack of money or a lack of knowledge of money, the money tension in a relationship can get thick and and choke you out.

And whoever controls the pocketbook controls the family. Money is power. I don’t mind paying my half because that’s an investment in our lives together. It shows that I’m at the table and paying attention in this relationship. I can’t hand over the money completely, blindly trusting that things are getting paid and obligations are being met, but I think I could (if required) hand over the physical act of paying the bills. And I don’t see it as a masculine or feminine thing to keep track of the family finances.

Mr. Perfect’s ideas aren’t too far from mine, so if we ever got to that point, I’m sure we could reach a decision about the money that we both could deal with.

How big a role does money play in the considerations before marriage? Does how much the other person makes matter? Who should be in charge of the money? What about going out to eat as husband and wife with separate bank accounts–who picks up the tab, or is that from household funds? What about groceries? Toothpaste? If I bought it, do I keep it in the divorce? And what about those pre-nuptual agreements?