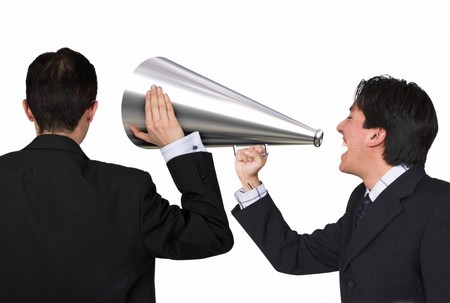 Sometimes we think we are communicating with people when we are not. The other person is hearing things we think we didn’t say. We think we are giving them feedback they think they aren’t getting. We aren’t listening; rather, we are preparing our next point in the argument. We don’t feel it’s necessary to speak any certain way; we just have to  make our  point.

Effective communication, in any arena, is hard. It’s harder when feelings are involved, when each person is starving to be heard and have their feelings validated, if not necessarily agreed with. Effective communication is draining sometimes. Sometimes you don’t feel like going through all of that to make yourself understood; the other person should just know.

Re-establishing the lines of communication isn’t usually the problem; it’s that the communication hasn’t really been established in the first place. The best example of this I can come up with is the relationship I have/had with my father. For the longest time, he wasn’t involved in my life. I hadn’t seen him since I was two, or eight, or ten. We would never get to establish a method of communication before he was gone again. Once he got himself together and started going to church, we finally began to try to have a relationship, but the tools weren’t there to build on an existing communication relationship. He had no idea how to talk to me, and I had no idea how to talk to him, so most of our conversations were about movies we had seen and what we thought of them, or descriptions of the people we worked with or saw on a daily basis. We retreated to our stories. It’s easier. We are both great with words, but when you analyze all the conversations, we weren’t really saying anything.

My dad sent me a letter in November of 2008 that made me really mad, but it was also one of the first honest communications I had ever gotten from him. It made me mad because of the tone and the ultimatum quality of it, but I understood a few things about him for the first time ever. It made me angry to think he had been feeling the way he had for such a long time before he said anything (which, I find, is where most ultimatums spring from–holding back and biting your tongue for so long you can’t take it anymore), but I began to see my father as an actual person, with thoughts and feelings like I had, not a moviefone, a restaurant critic, a half-listening ear on the other end of a cell phone, a complaintant about my cell phone usuage. He had hurt me a lot, but apparently, so had I.

Anyway, here are a few of my effective communication rules/regulations; feel free to try them.

I’m not the expert on communication, even though I talk A LOT! If you have any tips you want to add, or any points you want to disagree with discuss, feel free.